move through the area
×
Suikeras

Suikeras
De Suikeras runs from the inner city via Aweg and Hoendiep to the Suikerunie Terrain, and extends all the way to Hoogkerk. It’s a very important axis for Groningen, since a considerable amount of the anticipated city’s growth will be accommodated here. The Suikerunie Terrain itself will be developed into a complete city quarter, with 5.000 dwellings, many services, a park, and a train station It is an opportunity to build a climate adaptive piece of city from scratch, and to sustainably transform the current urban axis.

Groningen is a growing city with a central position in the province. In an expanding city, climate adaptation, connectivity and quality of life are key. However, enhancement of the urban environment and adaptation to climate change, require space. This is only possible when we rethink urban transport and connectivity. The space currently used for cars and asphalt should be reclaimed to make Groningen a greener and more resilient city.
Suikeras as the resilient Link
Reclaimed city space
The axes that traditionally connect the city with the region are now dominated by cars. Vehicles can penetrate deeply into the urban heart of the city. The introduction of ‘sustainable transport hubs’ on the outskirts of the city will allow Groningen to redefine and redesign these urban axes. Alternative modes of transport, such as automated electric vehicles and bicycles, are cleaner and less space consuming. The Suikerunie terrain, positioned on the urban ring road, is the perfect place to pioneer a sustainable transport hub. It will allow clean, slow transport of people and goods into the city. Leaving room for new high quality public space and green/blue spaces for climate adaptation. The Suikeras will then be transformed into a sustainable slow lane to serve the city.

Storm water management will become increasingly important in cities. need to stop with dischargeing clean rainwater into the sewage system or on our surface water. Instead, the storage and filtration of water into the soil is the way forward. This requires space within the city - space that is now consumed by roads and parked cars.

Waterways, like the Hoendiep, will transform into blue-green ecological corridors with the ability to slow down water discharge. Streets will transform into landscapes that infiltrate, evaporate and provide shade. Each neighborhood will have a central place for water storage and infiltration; a functional ‘storm water collector’ that will also benefit as attractive public space with swimmable water.

Agricultural land in the Province of Groningen is fertile, productive and part of a global system. The call for locally produced and consumed food is loud - shorter supply chaines mean fresher products. For long, the Suikerunie has been the region’s central destination for the production, processing and exportation of sugar beets. In the future, the area will regain this role as a market;place for locally produced food. A new cooling warehouse and market hall, de Campagne, will have a prominent address on the Suikeras; combining sustainable transport with sustainable consumption.
read further
collapse
Reducing the car
Transition of water management in 4 steps
Masterplan
A-Weg: Daylighting the original canal
View on A-Weg
Bringing back the canal
Hoendiep: A Green Axis towards the City Centre
Hoendiep: A Green Axis towards the City Centre
The Hoendiep Canal needs to restore its urban potential and become the spine of a water resilient city.
Zeeheldenbuurt: A New Ecological Retention Pond
Zeeheldenbuurt: A New Ecological Retention Pond
De Van Bakelvijver can become a precedent for all neighbourhoods to become a central spot for water retention and leisure activities.
Produce and consume locally
A new vision for 2120
Opportunities for the Suikerterrein as a hub for new forms of mobility, from, to and in Groningen. 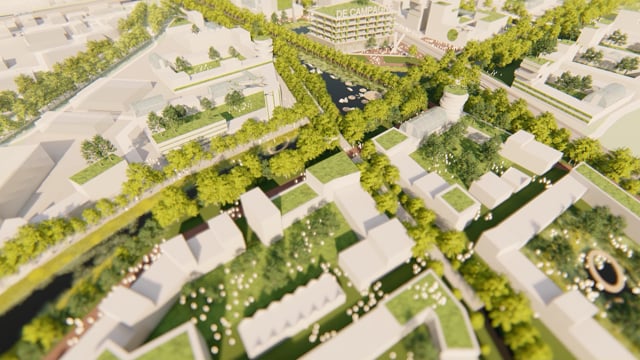 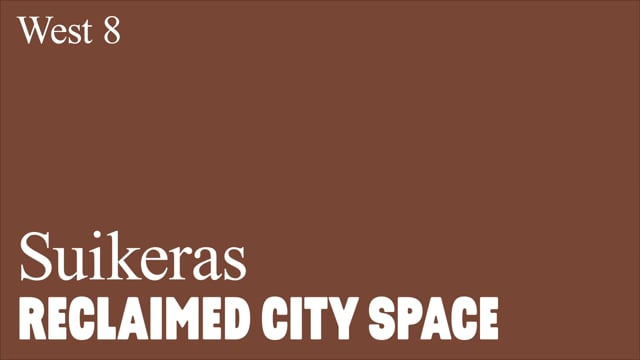 DOWNLOAD PDF
About the designers
West 8
West 8 is an award-winning international office for urban design and landscape architecture, founded in 1987 with offices in Rotterdam, New York and Belgium. Over the last three decades West 8 has established itself as a leading practice with an international team of 70 architects, urban designers, landscape architects and industrial engineers.

In a departure from the old demolish and install engineering methodology, or the current preserve and protect model, they are adding and expressing new natures. The real future in today's debate about sustainability lies not in a political or philosophical dialogue about what we are protecting or how we are going to 'sustain' it, but rather how to actively create new ecologies. Creating land and then painting it: in many ways, this is the soul of Dutch culture.

Explore other projects
View all projects